Ever since the government took the decision on November 8th to withdraw the old Rs 500 and Rs 1000 notes, the focus has been on the last mile implementation. The number of bank branches in various regions of the country became the focus of discussion. As per the data shared by the government in the Lok Sabha, more than 24000 new bank branches of Scheduled Commercial Banks (SCBs) were opened between 2013-14 and 2016-17 (till June). More than 8500 or 1/3rd of them were opened in Rural areas.

The RBI in December last year has also issued a roadmap for opening brick & mortar bank branches in villages with a population of more than 5000. RBI observed that coverage of banking services in unbanked villages is skewed towards the Banking Correspondent (BC) model and the ratio of branches to BC is very low.  A total of 6593 villages have been identified and allotted among scheduled commercial banks (including Regional Rural Banks) for opening of branches.

More than 35% of the new branches in Rural areas

A total of 24374 new bank branches were opened by public and private sector banks between 2013-14 and 2016-17 (up to June). More than 35% (8588) of these branches were opened in Rural areas followed by 7035 in Semi-Urban and 4222 in Urban areas. The definition of rural/urban is as defined by the RBI guidelines for identifying census centers. As of 30th June, 2016 there are a total of 84389 bank branches in rural areas out of the total 133668 bank branches of Scheduled Commercial Banks (SCBs) in the country. 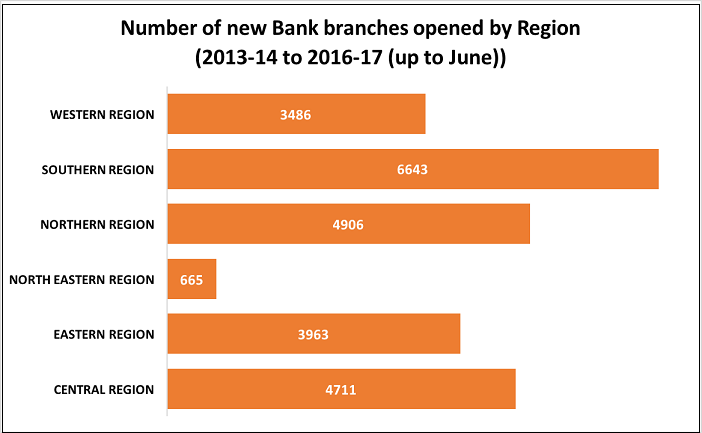 A Dummy’s Guide to the new Customs Baggage Rules
Five interesting insights from the SRS baseline survey
Data: What has been the trend in incidence of Vector-Borne Diseases ...