The Legislative Councils in states are like the Rajya Sabha, a house of members who are not directly elected by people. The Legislative Council is a permanent house with almost 1/3rd of the members retiring every two years. Not every state has a council. Article 169 of the constitution authorizes the parliament to create or abolish councils in states. Currently, there are about seven states with functional councils.

The Election process for the council follows a system of proportional representation by means of the single transferable vote (STV) as mentioned in Article 171 of the constitution. This system is different from that of the normal election process to the Lok Sabha and the State Assemblies. In an STV election, a candidate requires a minimum number of first preference votes (or quota) to be elected. The quota for a single seat to be filled is determined as follows

If none of the candidates get the required quota of first preference votes, then a process of vote transfer takes place, successively eliminating those who get the least number of first preferential votes. The process is explained in detail below.

The Process of Counting

Once the voting is over, the counting happens in various rounds after determining the quota required for the winner. Let us take an example.

For instance, in an election to fill one vacancy, there are four candidates in the fray and the total number of valid votes is 1235. According to the STV formula, the quota of first preference votes required for victory is 618 as per the formula.

In the first round, any candidate securing a minimum of 618 first preferential votes gets elected.  In this example, none of the four candidates secures the quota. Hence there is no winner after the first round and the process of vote transfer takes place. At the same time, the candidate with the least number of first preference votes is eliminated. 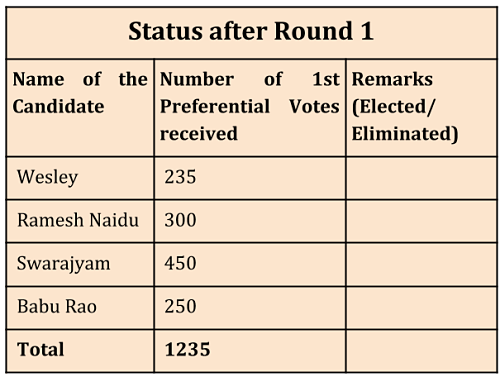 After round two (after transfer of votes), Swarajyam has 620 votes, which is two more than the required quota. Hence she is declared elected and the remaining three are eliminated. This process of transfer continues until a clear winner is found. Sometimes, the process can run into multiple rounds to find the winner.

What about Multiple Vacancies?

Similar process is followed for multiple vacancies also. The STV formula for multiple vacancies will be the same with the only change being the number of vacancies to fill. Even there, the quota of first preferential votes is obtained and the candidates who reach the quota first will get elected. If clear winners are not found, then the transfer of votes takes place till winners are found. The process can get quite complex sometimes depending on the number of contestants.

Share. Twitter Facebook Google+ Pinterest LinkedIn Tumblr Email
Previous ArticleEncouraging Dalit Entrepreneurs – 28 Entrepreneurs to receive 104.7 Cr from Venture Capital Fund for SCs
Next Article The Himachal High Court awards a compensation of 20 Lakh rupees to Parents of Students who were washed away in the Beas River

Manmohan Singh Spent 699 crores in 10 years while Vajpayee spent 144...
NOTA vote share goes down further in 2019
25% of all Padma Awards in Sports went to Cricketers