While the survey numbers have been quoted correctly by newspapers, they did not mention any other details of the survey including the sample size.

Many newspapers in India picked up a PTI story which said that a new Pew survey indicated that 85% Indians trust their government, 55% support autocracy and 27% want a strong leader. Are these numbers put out by the Pew? What is the sample size of the survey? Here is a Fact Check.

What is this Pew Survey?

Pew Research Center is based out of the US and is known for public opinion polling on various issues. Pew has been conducting a global survey by name ‘Global Attitudes & Trends‘ that focusses on different themes each year. In 2017, the Pew survey referred to by the newspapers is a 38 nation survey about the support for democracy & its alternatives. This is a part of the Pew Research Center’s Spring 2017 Global Attitudes Survey. According to the Pew website, these surveys are conducted via telephone or face-to-face interviews, depending on the country. All the results are based on national samples.

What is the sample size for India?

According to the Pew website, India results are based on a sample size of 2464. All the interviews in India were face-to-face and were conducted in Hindi, Bengali, Tamil, Telugu, Kannada, Gujarati, Marathi & Odia. The survey was conducted between February & March 2017. 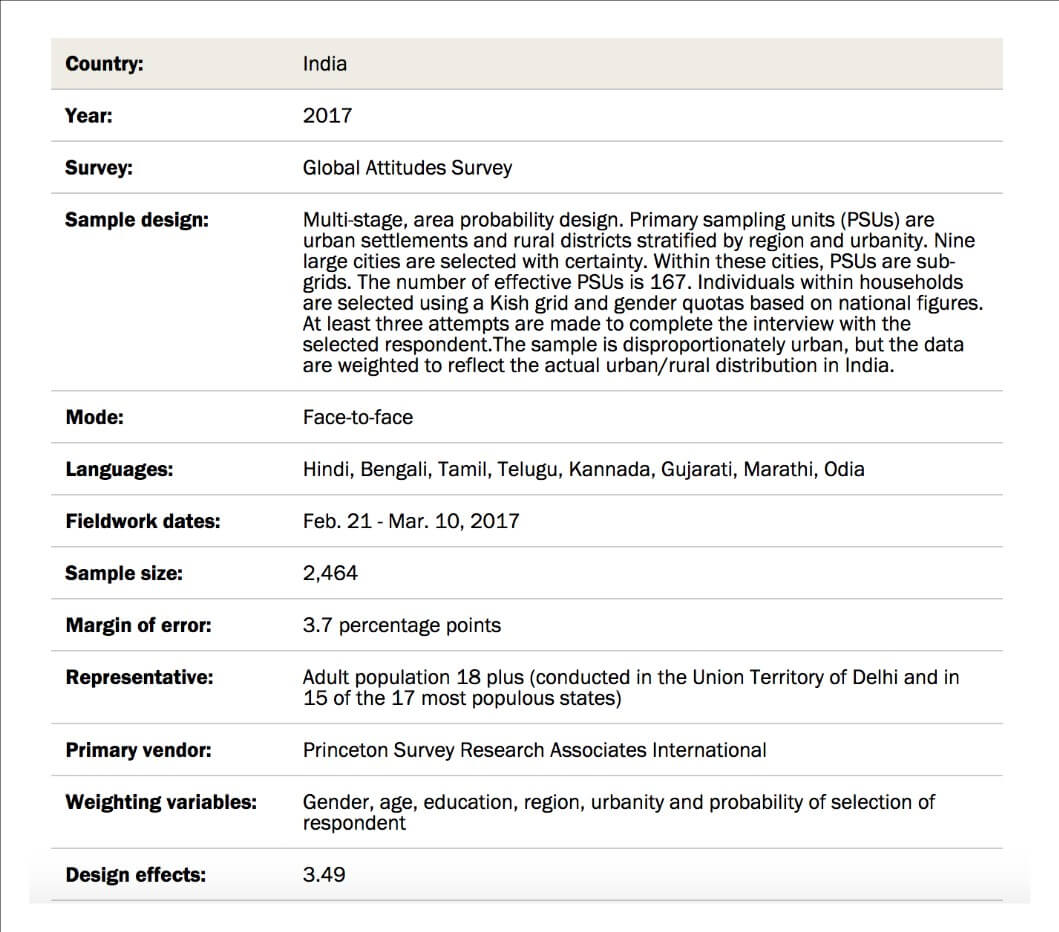 What did the survey say about India?

Citizens okay with both Direct & Indirect say in policy: Among those surveyed in India, the support for both direct & indirect say in policy matters found support. 75% felt that a system where elected representatives decide on law is total good while 76% also felt that a system where citizens directly vote on major national issues is total good. The survey also found 65% support in India where experts (technocrats) instead of elected representatives make policy.

What about Previous surveys?

The ‘Global Attitudes & Trends’ survey has published results on various issues in the past including approval for a country’s leadership, satisfaction with the economy etc.  In 2006, Pew research indicated that 80% from India felt optimistic about country’s progress in the next 5 years. In 2009, the survey reported 67% viewed Global Warming as a serious problem and 84% felt that the environment should be protected even at the cost of growth & jobs. In the same year, 73% felt that the economy is in good shape.

The 2010 survey indicated that 75% Indians saw Lashkar-e-Taiba & Pakistan as the greatest threats while 83% wanted relations with Pakistan to improve. In 2010, 57% felt that the economy is in good shape, down from 73% in 2009. In the same year, 85% felt that the government was doing a good job in handling the economy.

In late 2013 & early 2014, the Pew survey highlighted the growing discontent with the then UPA government. The survey found that 70% were dissatisfied with the way things were going in the country, 42% felt the economy was not doing well.

Claim Check: Are the newspaper reports true then?

While the newspaper reports cited the correct numbers, they did not mention other details of the survey like sample size, period & form of the survey.

Share. Twitter Facebook Google+ Pinterest LinkedIn Tumblr Email
Previous ArticleNumber of ATMs in Rural areas less than what it was in September 2016
Next Article Fact Check: Did PM Modi inaugurate an already open ‘All India Institute of Ayurveda’?