EMMC setup under the Ministry of Information & Broadcasting reported thousands of violations of various media laws by TV channels. As per the latest information provided by the government, action was taken in just 88 such cases.

The Ministry of Information & Broadcasting (MIB) has reportedly ordered NDTV India to go off air for a day in breach of program code. But it is one of the rare instances where action has been taken by the MIB. Factly had earlier reported that thousands of violations of Media laws by Television Channels were reported by the Electronic Media Monitoring Centre. It is now revealed that the Ministry of Information & Broadcasting has taken action in only a handful of cases since 2013 (88 to be precise).

The EMMC reported hundreds of violations in various categories including violation of the Cineatograph act, the advertisement code and the program code for private TV channels.

EMMC reported hundreds of violations for each month in 2014-15 with respect to screening of films, for example, non-display of Censor certificate before screening of films, non-indication of Censor rating as part of film promos which are otherwise cognizable and non-bailable offences under section 7(1) of the Cinematograph Act, 1952.

As far as violations regarding advertisements are concerned, during the financial year 2014-15 alone,

“All advertisement should be clearly distinguishable from the programme and should not in any manner interfere with the programme viz., use of lower part of screen to carry captions, static or moving alongside the programme.“

Electronic Media Monitoring Centre (EMMC) was established in 2008 as a sub-ordinate office under Ministry of Information & Broadcasting with the exclusive task of monitoring content of private satellite TV channels for violations of Programme Code and Advertising Code.  At present, EMMC records and monitors around 600 TV channels. EMMC monitors and carries out a scrutiny of violations by electronic media in accordance with Codes framed under the Cable Television Networks Regulation Act, 1995. EMMC puts out reports on violations along with the recorded clips to the Scrutiny Committee, which examines and goes into the purported violations and forwards its findings to the Inter-Ministerial Committee and other bodies for further action.

Government takes action only in a handful of cases

Out of the thousands of violations reported by the EMMC, the government has taken action only in a handful (88 to be precise) since 2013. This information was shared by the Minister of State for Information & Broadcasting in the Rajya Sabha. The action against NDTV India was taken in the light of an advisory issued by the MIB in July 2015 that talks about coverage of anti-terrorist operations by security forces.

The  details  of  action  taken  against  the  content  telecast  on  private  satellite  TV  channels in violation of the Programme and Advertising Codes since 2013 is given below. 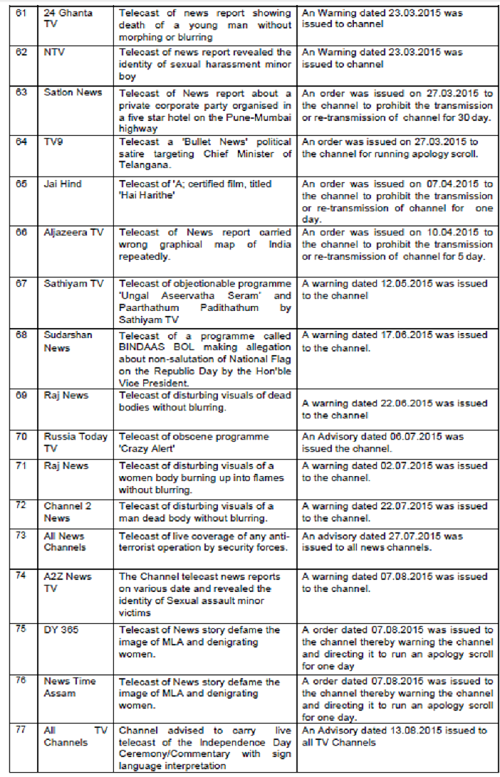 Share. Twitter Facebook Google+ Pinterest LinkedIn Tumblr Email
Previous ArticleRajasthan accounted for half the Jail Breaks in the last 5 years
Next Article Are you an Overseas Indian willing to Vote in Indian Elections? Here is something for you

The Government has launched the ‘Digital Locker’. Here is what you s...
Currently, Excise Duty on Diesel is more than 4 times of what it use...
How one man's RTI application made the Government recover Rs 1.8 cro...