The summary of the Agricultural Census of 2010-11 was released recently. The number of land holdings saw a rise while the average size of the land holding came down. This has been a consistent trend over the last few censuses. The only exception is the marginal increase in the total area under operation compared to 2005-06.

What is the Agricultural Census?

Agriculture Census in India is conducted at five yearly intervals for collection of information about structural aspects of agricultural holdings in the country. The basic statistical unit for data collection is ‘Operational Holding’. The concept of agricultural operational holdings does not include those holdings which are not operating any agricultural land and are engaged exclusively in livestock, poultry and fishing etc. The reference year for the present Census was Agriculture Year 2010-11 (July-June). Agriculture Census data is collected in three phases. During Phase-I, data is collected on primary characteristics such as number and area of operational holdings. In Phase-II, detailed data is collected on sample basis from 20 percent villages covering characteristics such as tenancy, land use, irrigation, cropping pattern, dispersal of holding etc. During Phase-III, generally referred to as Input Survey, data is collected on pattern of use of inputs. 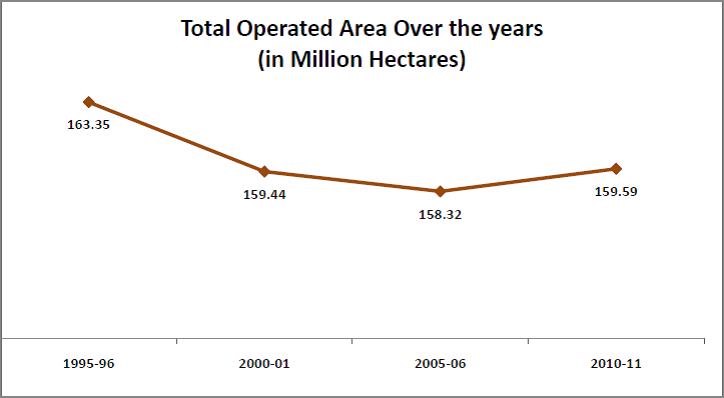 On the basis of operated area, operational holdings in Agriculture Census are categorized as follows, Featured Image: By ILRI (Ploughing with cattle in West Bengal) [CC BY 2.0], via Wikimedia Commons