The government recently released the new ‘Print Media Advertisement Policy’. The policy seeks to bring in more transparency and accountability in the release of government advertisements and introduces a marking system for empanelled publications.

The Ministry of Information & Broadcasting recently released the new ‘Print Media Advertisement policy’ of the Government of India. While releasing the new policy, the government stated that the policy focuses on streamlining release of Government advertisements and to also promote equity and fairness among various categories of newspapers/periodicals. This assumes significance at a time when close to 1000 crore rupees is being spent every year on government advertisements, as reported by Factly earlier.

For the first time, the policy introduces a new marking system for newspapers to incentivize those who have better professional standing and get their circulation verified by ABC or RNI. The government believes that this will ensure transparency and accountability in the release of advertisements. The marking system is based on six objective criteria with different marks allotted to each criterion.

These criteria become important because currently, most of the publications empanelled by the DAVP have their circulation audited by a CA and not by ABC or RNI. It is common knowledge that many of them fudge circulation figures to get government advertisements.

The policy also makes it clear that newspapers in the medium category shall get advertisements from DAVP only when they get more than 45 marks in the above marking system. 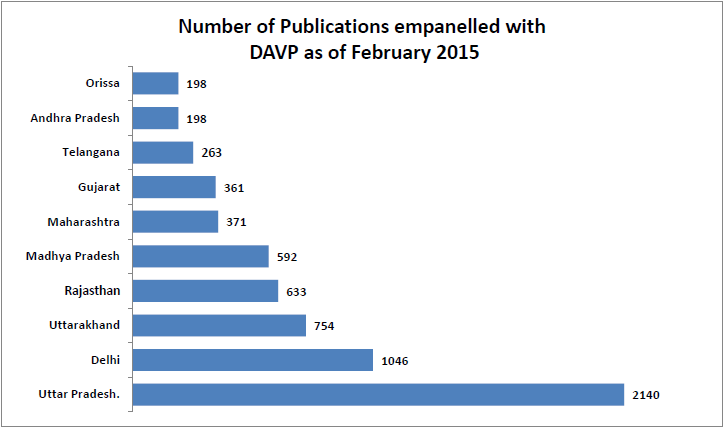 The policy has classified Newspaper/Journals into three categories namely Small, Medium and Big.  The policy also specifies that approximately 30% of the advertisements should be in English language, 35% in Hindi and 35% in regional and other languages like Bodo, Dogri, Garhwali, Kashmiri, Khasi, Konkani, Maithili, Manipuri, Mizo, Nepali, Rajasthani, Sanskrit, Santhali, Sindhi, Urdu and Tribal languages.

The policy mentions relaxation in empanelment procedure to provide special encouragement for Regional language/Dialects small and medium newspapers, mass circulated newspapers (circulation >1 lakh), newspapers in North Eastern states, Jammu & Kashmir and Andaman & Nicobar Islands. The policy emphasizes that DAVP shall make efforts to release more social messages and related advertisements which are not date specific to periodicals. The policy also mentions that efforts will be made to release more advertisements to newspapers with special emphasis on North East, J&K and other remote areas. The policy emphasizes that the budget for all India release of advertisements shall be divided among states based on total circulation of newspapers in each State /Language. Data: Is flexibility in the choice of subjects at the Secondary leve...
Massive FCRA Cancellation is not a new thing. 4138 NGOs lost their F...
A Guide to the new Passport Rules