There are four types of security classifications as given below. Files/papers contained sensitive information are classified into the following based on the content and procedure as decided by the government.

Successive governments (UPA & NDA) have been refusing to declassify the files they possess on Netaji. The Prime Minister’s office in November 2014, in response to a RTI application filed by Mr. Subhas Chandra Agarwal , said that it does have some files related to Netaji, but refused to disclose their contents. 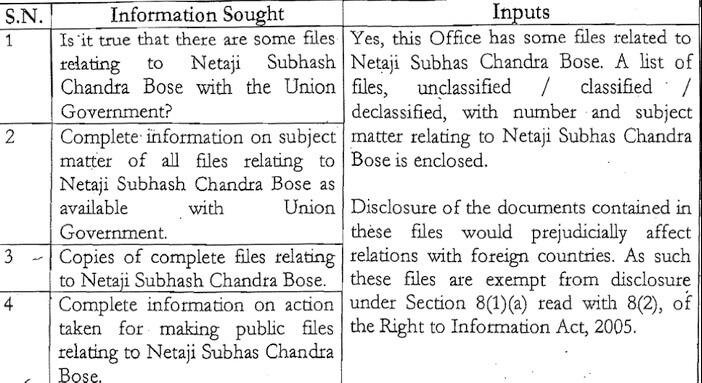 In its reply, the PMO disclosed the list of files, but said the disclosure of the documents in the files would prejudicially affect relations with foreign countries. The reply also said that these files are exempt from disclosure under Section 8(1)(a) read with 8(2), of the Right to Information Act, 2005. Sec 8(1)(a) of the RTI act is reproduced below.

The RTI response by the PMO listed the 41 files held by the government on Netaji. Out of these 41, only two are declassified and are sent to the National Archives. Two of the four files designated as ‘Top Secret’ relate to the death/disappearance of Netaji (Justice Mukherjee Commission of Inquiry). Another of this file relates to correspondence with the widow and daughter of Netaji and the last one refers to the transfer of Netaji’s ashes to India.

Most of the secret files refer to the disappearance of Netaji and the appointment of an inquiry committee. One of these files refers to Bharat Ratna award and mentions three names other than Netaji.

The confidential files contain some letters and also have information about the funeral of Netaji’s widow. The Unclassified files seem to be very general in nature.

What is the NDA Government saying now?

The BJP while in the opposition had demanded the disclosure of these files. Union Home Minister, Rajnath Singh as BJP President in January 2014 had demanded that “The mystery behind his death should be unveiled by the Union government to let the people know the truth.”

The BJP, now in power is citing the same reasons as the previous UPA government. It says that India’s relations with some foreign countries would be affected if these files are declassified. Only time will tell if they stick to their earlier demand of full disclosure.

1 out of every 100 migrants in India move for Education
How much do people spend?
Finance Minister bats for Plastic Currency, Card Transactions grow b...