The National Crime Records Bureau (NCRB) is an attached office in the Ministry of Home Affairs (MHA). NCRB is tasked with collection and dissemination of a secure national database on crimes, criminals and law enforcement agencies etc. Every year, the NCRB collects data from Police departments at the state level and compiles it into a Crime in India report. The report has detailed information on various types of crimes.

In 2014, the NCRB has made significant changes to the method of its collection and dissemination of crime data. In its new template for collection of crime related data, there is a section on riots as defined under Sections 147,148,149,150 & 151 of the Indian Penal Code (IPC).

There is a separate section to collect data on offences that promote enmity between different groups as defined under Sections 153A & 153B of the IPC.

Before 2014, all the data related to riots used to be collected under one head called riots. From 2014, the data on riots is categorized into many different sub heads namely communal riots, Industrial riots and riots for political reasons etc. The data collected under Sections 153A & 153B is counted as Communal riots.

One has to remember that NCRB gets all the data from state police departments. And this data is strictly based on the sections mentioned in the First Information Report (FIR) of the cases filed. The NCRB also follows ‘Principal Offence Rule’ for counting of crime. Hence among many offences registered in a single case, only most heinous crime will be considered as counting unit, thereby representing one case.

What does the NCRB data say about Communal incidents? 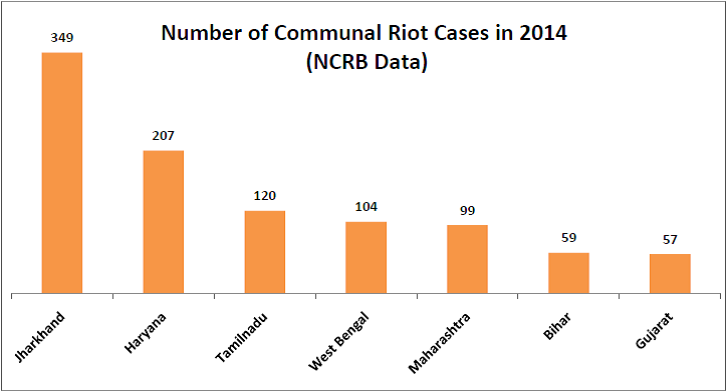 What could be the possible reason?

The NCRB numbers could be high only because of the reason that hate speeches qualify as incidents in NCRB data (because of Sec 153A in FIR), while they might not be counted as incidents by the Human Rights Division of the MHA. But even then, the NCRB numbers should be higher in every state and we should not have had a mixed trend. The only plausible reason for such huge discrepancy is the shoddy work of the state police and the intelligence departments. But why would they goof up such data is a million dollar question. This also raises some uncomfortable questions about the sanctity of government data.

Even as we enter 2019, data on Accidents, Suicides & Prisons not ava...
MDR for Debit Card Transactions will now be based on Merchant Turnov...
A Dummy's guide to understanding the working of Lok Sabha & Rajya Sa...