It has happened on 41 occasions in the past

** These states do not exist anymore.

Where did this happen most?

A quick look at the states reveals that it happened in almost all regions of the country (North, East,West & South). It happened 6 times in Sikkim, 4 times in Gujarat, 3 times each in Arunachal Pradesh, Assam, Jammu & Kashmir, Karnataka.

** These states do not exist anymore. 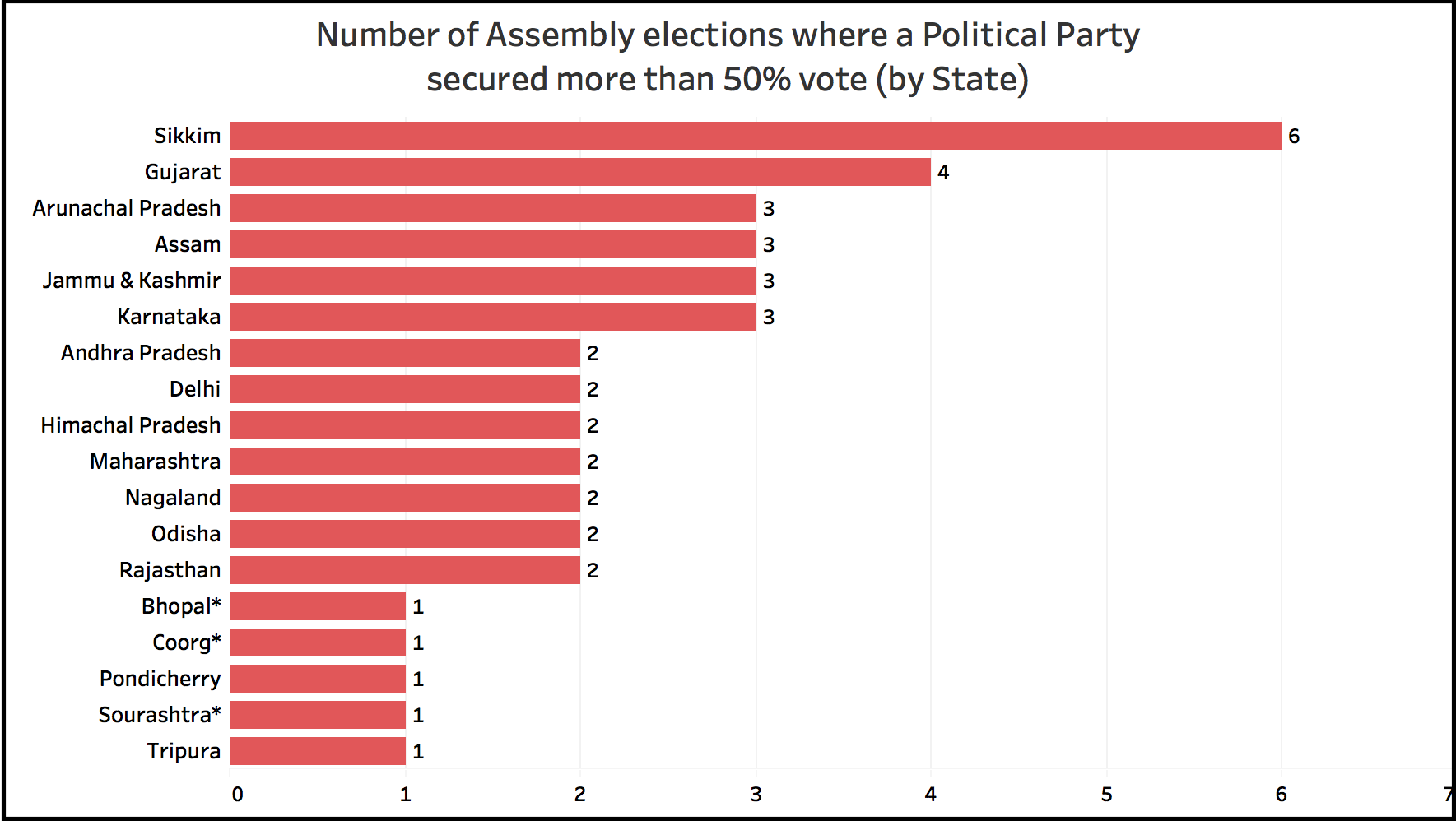 Which party did this most times?

No prizes for guessing here. Congress party achieved this most number of times (30) followed by the two Sikkim based state parties. The AAP, Janata Dal, Janata Party, National Conference & Telugu Desam Party achieved this once each. The Congress achieved this feat when it was essentially a two party election and also most times before 1980. When did this happen most times?

As one looks at the period when this feat was achieved most times, it was done quite a few times in every decade up to 1990. Since then, the number of times where a party polled more than 50% of the total vote has been continuously declining. After 1990, it happened only on 9 occasions. Of these 9 occasions, the North-Eastern states of Arunachal Pradesh, Nagaland & Sikkim accounted for eight (8). So in the last 27 years, Delhi assembly elections of 2015 was the only occasion when a party polled more than 50% votes barring the North-Eastern states. There could be multiple reasons like the emergence of strong regional parties in the last three decades,multiple parties in the fray, alliances etc. for this fall in the last three decades. Elections are no more a two party affair. Which party won the highest ever vote in  history?

The highest ever vote share recorded in the history is 71.09% by the Sikkim Democratic Front in 2004. The Sikkim based parties feature thrice in the top 5. The National Conference won almost 67% of the vote in 1962 in Jammu & Kashmir. AAP’s 54.3% in Delhi 2015 assembly elections is 14th in the list.

Did any party win a greater percentage of seats than AAP did in Delhi 2015?

The AAP secured 54.3% of the total vote in 2015, but won 67 out of the 70 seats which is a whopping 95.7% of the total seats. While this is on the higher side, it is not the highest. In Sikkim, the Sikkim Democratic Front (SDF) & the Sikkim Sangram Parishad (SSP) made a clean sweep, winning all the 32 seats on offer. The SSP did this in 1989 and the SDF in 2009. In terms of the percentage of seats won (of those parties that won more than 50% vote share), AAP stands 4th and all the other positions in the top 5 occupied by the Sikkim parties.