As per the latest available information with the Ministry of External Affairs (MEA), more than 6800 Indian nationals are lodged in foreign jails. More than half of them are lodged in jails of the Middle East nations. These include defence personnel, fishermen and other Indian citizens.

A quarter of them are languishing in Saudi Arabian Jails 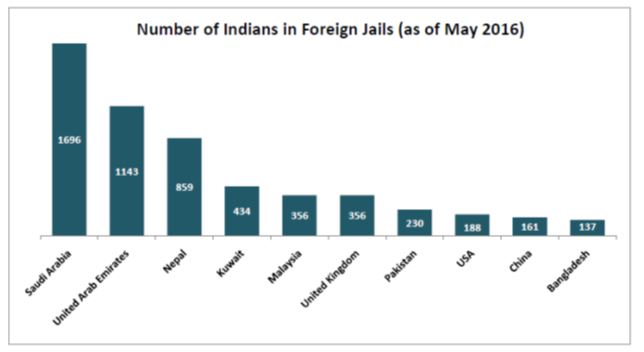 This number could be more because many western countries do not share information about foreign nationals who are in their jails due to the strict provisions of their privacy laws.  The information available with the MEA is gathered by Indians Missions abroad.

Why are they in Jails?

As per information provided by the MEA, these Indians are in foreign jails for various crimes such as

Indian Fishermen are apprehended every year In case of Pakistan, India has a bilateral Agreement on Consular Access, signed in May 2008. The India-Pakistan Joint Judicial Committee, consisting of retired judges of superior judiciary from the two countries, visit jails in both countries, to ensure humane treatment and expeditious release of prisoners, including fishermen, who have completed their prison terms.

In the case of Sri Lanka, Indian Mission works closely with the Sri Lankan Ministry of Defence, the Attorney General’s Office and the law enforcement agencies, to secure the release and repatriation of apprehended fishermen. There is a Joint Working Group on Fisheries and a Joint Committee on Fisheries, which take up fishermen’s issues for resolution on basis of the bilateral Understanding on Practical Arrangements of October 2008. In addition, talks are held from time to time between Fishermen’s Associations in India and Sri Lanka.

In the case of Bangladesh, on receipt of information of the arrest of Indian fishermen, Mission contacts the concerned District Magistrates in India to ascertain their Indian nationality and thereafter pursue with the Bangladesh authorities for their release. For this, Mission seeks consular access from Ministry of Foreign Affairs and contacts local NGOs for their welfare during their imprisonment in Bangladesh.

As per information available with the MEA, 74 missing defence personnel are believed to be in Pakistan’s custody, including 54 since 1971.  According to the MEA, the Indian government has repeatedly taken up the matter with the Government of Pakistan through diplomatic channels and during high-level contacts, for their release. However, Pakistan does not acknowledge the presence of any Indian missing defence personnel in its custody.

Hate Crime in America: White Offenders and Racial Bias
Congress and BJP equally guilty of disrupting Parliament when they w...
Why are discounted SMS rates not valid on certain days?