Uninterrupted power supply is one of the most important election issues in the country. Data shows that while the overall energy deficit in the country has come down to less than 1% in 2016-17, the aggregate losses are still a huge concern.

Uninterrupted power supply is one of most the important election issues in the country. Even in the recent UP election, the issue of power supply was raised in various election rallies. States also make it a point to highlight uninterrupted power supply in their bid to promote Industry & Investment. While the aggregate power deficit in the country has decreased from 8.5% in 2011-12 to 0.7% in 2016-17, Transmission and Distribution (T&D) losses also referred to as Aggregate Technical & Commercial (AT&C) losses are still above 20% in 2015-16.

Power Deficit in the country

At an all India level, the power deficit has significantly decreased from 8.5% in 2011-12 to 0.7% in 2016-17. Both the power generation and demand has gone up significantly during this six-year period. While the supply has increased by about 32%, the demand has gone up by around 22% during this period. In fact, India also supplied 2991 million units of energy to Bangladesh between April and November of 2016. 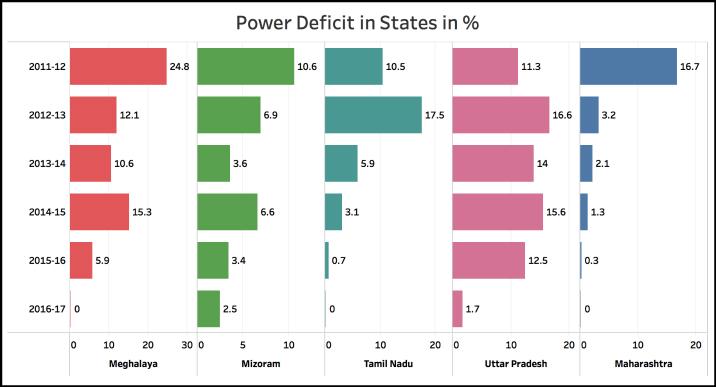 Losses are still a huge concern

Traditionally, losses in the power sector are accounted as Transmission & Distribution losses (T&D). These losses are accounted as a percentage of output. T&D losses, as a measure of grid losses, have been replaced by Aggregate Technical and Commercial (AT&C) Losses for better clarity. T&D losses together with loss in revenue collection give AT&C losses.

As per information available with the government, the following are the major factors responsible for AT&C losses.

At an All-India level, the total losses have come down from 26.63% in 2011-12 to 21.81% in 2015-16. It is clear that the fruits of increased power generation cannot be reaped unless there is serious effort towards reducing losses. Even in 2015-16, there are 17 States/UTs with aggregate losses exceeding 25%. In other words, out of the 100 units of energy supplied, the government is able to account for less than 75 units in these places. South of India is the only region in the country where every State/UT has an aggregate loss of less than 20%. In all other regions, there are places with losses exceeding 30% as well. In Jammu & Kashmir, Bihar & Arunachal Pradesh, the aggregate losses are close to 50%. Data: More than 90% of the ‘Crimes against SCs’ are pending in Court...
Review: What are the latest Research Studies about COVID-19 in India...
The curious case of Sambhaji Lakshman Patil - How the law is helping...