There is a host of forms one needs to fill for contesting the Lok Sabha or Assembly election in the country. One of these forms is called the Form-B or more commonly known as the B-Form. But, what is this form all about? Why is so much importance attached to this form?

There is every chance that you must have heard about  the B-Form during elections. This is probably the most important form for any person planning to contest elections on a political party ticket. But what is a B-Form or Form-B?

Filing the Nomination
Once the elections have been notified by the Election Commission, interested candidates file their nomination. Nomination Paper has different formats for different elections.

Similarly there are other forms for contesting the Legislative Council elections and some special forms for certain Assembly constituencies in Sikkim. 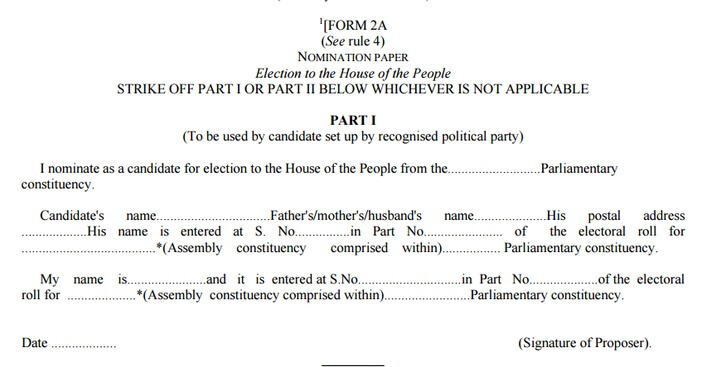 The candidates are required to fill up all columns in this form and no column can be left blank. If there is no information about any of the items, remarks such as ‘NIL’ or ‘Not Applicable’ or ‘Not Known’ has to be indicated in those columns. If a candidate fails to fill the blanks, the nomination paper is liable to be rejected by the Returning Officer at the time of scrutiny of nomination papers.

For more details on form-26 and the details to be filled in that form, go through this detailed story.

Then what is the B-Form?
In the relevant nomination form, candidates indicate if they are put up by a political party or contesting the election as an independent. A candidate will be considered an independent and will not be allotted the reserved symbol of the party unless his name is mentioned in the B-Form. Hence a lot of importance is attached to the B-Form and it is often given at the last minute to avoid rebels etc.

For instance, in the B-Form of Janasena president & Telugu actor Pawan Kalyan, no substitute is named. In the following B-Form issued by the Congress party for a Lok Sabha constituency in Telangana, a substitute is named.